As well as helping at two centers for Belgian refugees, doing secret intelligence work and working in the postal censorship office, Teresa made time to lend a hand at events put on to raise funds to help the war effort. On the 16th February 1915 Teresa and some of her friends were selling at a sale of cakes and preserves in aid of a Belgian field hospital.

Teresa and her stall at the Attingham garden fête, 1924.

Teresa did all that she could to help the Belgian refugees and had taken one of the young Belgian boys, Adolf Keyeux, under her wing. He was especially bright and Teresa made an effort to help him with his education. Eventually she assisted him in gaining a place to study in Leeds. Throughout the war he sent letters and cards to her, updating her on his progress and asking for her advice and assistance.

Other people who were also concerned with the care of the Belgian refugees had more trouble. On the 28th February Teresa received a letter from H. E. Ayris who had taken on Monsieur and Madam Busscherts, a refugee couple who had come from the Edmonton centre, London.

The Busscherts had just had a baby, which was putting pressure on Mr Ayris’s resources. He wrote asking Teresa whether he could seek financial help from the committee established to care for Belgian refugees. Times were hard for the Busscherts family as their Belgian landlord threatened to seize their possessions unless they forwarded him rent money.

As well as assisting the refugees, Teresa was also keen to help her own family, especially her sister, Gioconda, who found it difficult to settle to doing war work. Gioconda wanted to join Teresa working with the refugees in London but their mother, Costanza, felt that it might be ‘too much responsibility. She is so dependant and has so little initiative, and if she only has you to lean upon, you may find her too heavy.‘

1915 marked the beginning of a busy few years for the British Red Cross hospitals in Shropshire. In 1915 a total of twelve ambulance trains came to Shrewsbury with 1,666 men. About forty were taken to the Royal Salop Infirmary and many soldiers were so badly wounded that they had to be carried to the institution on a hand ambulance. In February Mrs Van Bergen, the tenant at Attingham Hall, visited the Royal Salop Infirmary, eager to do all that she could for the wounded soldiers.

Wounded soldiers and a nurse at the Attingham hospital, c.1917.

As the Commandant of the Attingham hospital, Mrs Van Bergen’s uniform would have been much grander than that worn by the nurses as a mark of her higher rank. Her uniform would have consisted of a scarlet two-piece jacket and skirt, a blouse with a collar and tie and a hat with a ribbon and a badge of rank.

The convalescent hospital at Attingham took in many patients. Less badly injured or recovering soldiers were taken in ambulance wagons or in borrowed motor cars to local military hospitals like the one at Attingham. Helpfully, a motor ambulance, funded by members of the Ludlow Race Society, had been presented to the Shropshire Red Cross Society in January 1915. To see a British Pathé film of WWI ambulance vehicles, please click here. 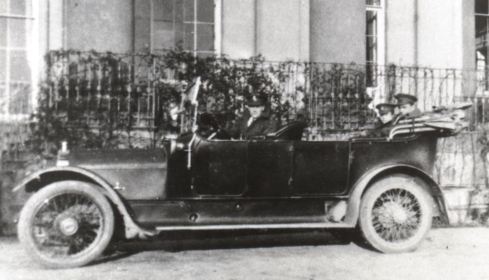 Mr Van Bergen wrote to Lord Berwick’s Land Agent, Louis Dease, in February 1915 asking if it would be possible to make two tennis courts at a corner of the field near the river. He also mentioned that grooms with the army, which used Attingham’s stables to train mules and horses to send to the Front, sometimes left the gates open and livestock escaped.

February must have been a worrying month for many people in Britain as Germany declared that the waters around Britain were a war zone in which naval, merchant and passenger ships could be sunk without warning. On 18th February 1915 German U-boat attacks began and soon the number of ships being sunk was outstripping the number being built.

Lifebelt from HMS Formidable, sunk on the 1st January 1915 in the English Channel by torpedoes from German U-boat U24. © IWM (MAR 66)