Although the war had brought dramatic changes for Teresa, many aspects of her life went on as they had before the war. In particular, her interest in music persisted. In April 1916 Teresa was invited to a dinner party given by Edith, Countess Rucellai and she was asked to play the piano to entertain everyone as she had often done before the war. 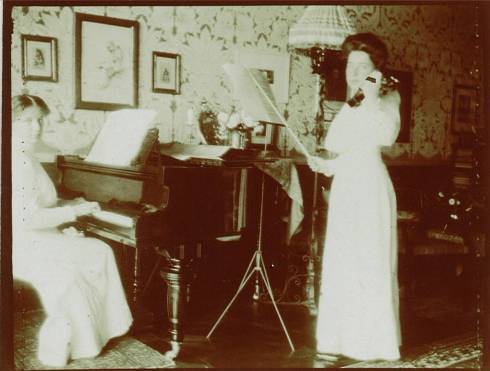 Teresa (left) and her sister Gioconda (right) in their home in Venice, early 1900s.

Teresa was a skilled musician and had been trained as a professional concert pianist. At the age of fifteen she became the pupil of the admired Swiss pianist Fraulein Wilhelmina Adler in Munich, Germany. She had to practise for three hours a day and had two piano lessons daily. In 1907 she returned to Venice where she became the pupil of Baron Giorgio Franchetti. 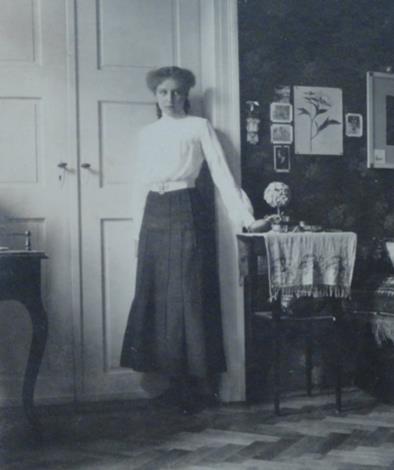 The Rucellai family, who invited Teresa to play in April 1916, had been friends of the Hultons since before the war. Letters in the archives show that they often sent donations to the war hospitals where Teresa worked. 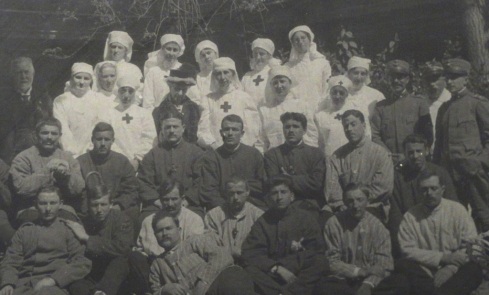 Nurses, staff and patients at the Infermeria Britannica (British Hospital) in Florence, Italy, 1916.

As well as donations of items like sheets and bandages, war hospitals needed food supplies for the wounded soldiers. British Red Cross V.A.D. members worked as cooks in British Military Hospitals in places like Genoa, Bordighera, Cremona, Arquata Scrivia and Taranto. On average they prepared and served 40,000 meals per month. Dishes for the recovering soldiers included jellies, broth, custard and chicken soufflé. 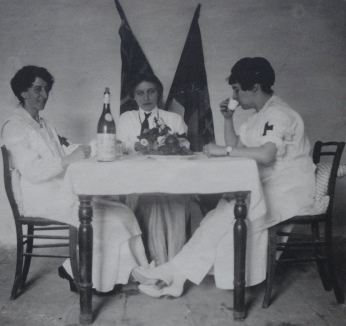 Teresa (centre) with Contessa Carafa (left) and Mrs Nott (right), Joanniz, in the Udine province of northern Italy, May 1917.

Food was prepared for the canteen where Teresa worked at Cervignano by an Italian man, Ernesto. Photographs of him survive in Teresa’s wartime photograph album. 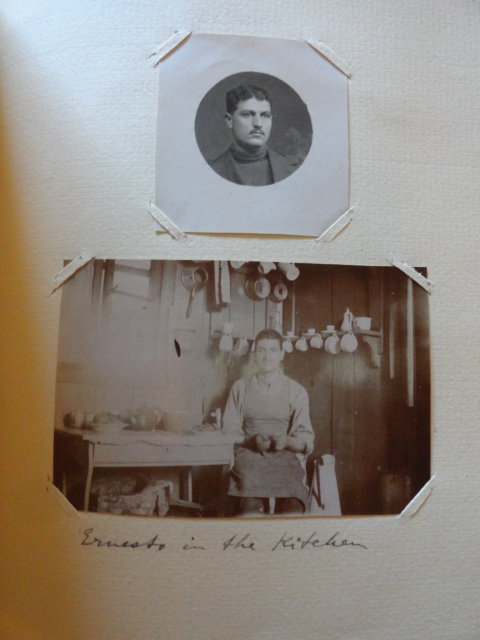 Click here to see a film about lunchtime in a hospital in Southport, Lancashire.

Teresa’s uncle, Gino Villari, the half-brother of her mother, begun a new army post in Salonika, Greece. Her father wrote to her giving her Gino’s new address, although he added that he was ‘uncertain as to whether [Gino] will be comfortable in his new post.’ 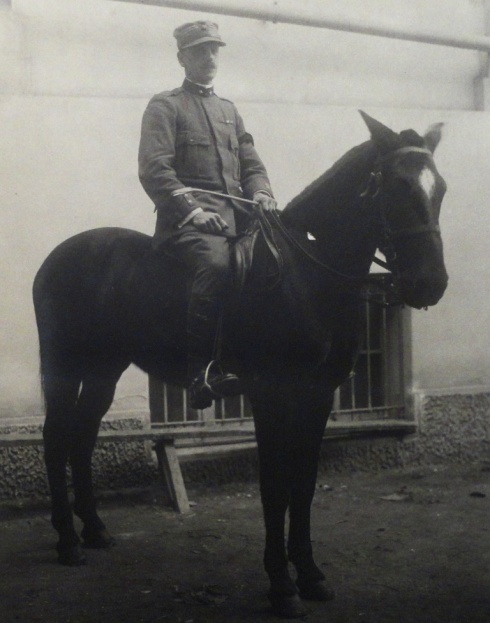 Teresa’s sister, Gioconda, was not enjoying her new job as a secretary in the Admiralty Intelligence Division in London. Gioconda complained that she had not been paid for her work and received few days off. 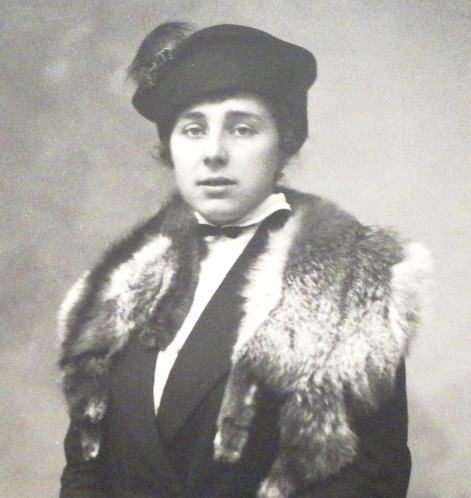 The Hulton family were also beset by the worry that the Austrian-Hungarian army would destroy Venice before the end of the war. Teresa’s father, William Hulton, wrote in a letter that he thought it might be a good idea to deposit valuables elsewhere. 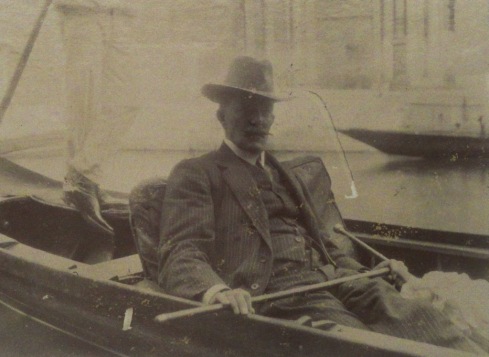 In 1916 Lord Berwick was working as an Honorary Secretary to the British Embassy in Paris, but he had kept military books that he bought before and at the beginning of the war when he was in the Shropshire Yeomanry. 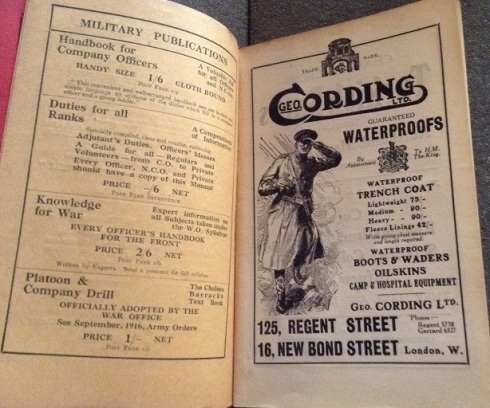 Advertisements for military publications and waterproofs in Company Drill Illustrated, 1914.

One particularly interesting book is Company Drill Illustrated (1914) which includes illustrations of commands and signals that Lord Berwick would have used in the Yeomanry. 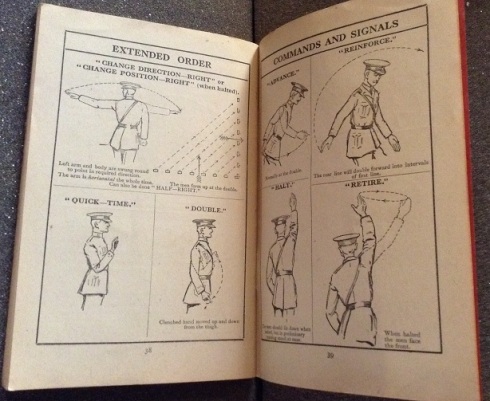 The book is currently kept in the Inner Library at Attingham Park. Inside it is a paper with a list of questions that a commander should ask himself before attack. This was possibly left as a bookmark by Lord Berwick.

This book also includes many advertisements. These range from advertisements for pyjamas, a series of military books, coal-tar shaving soap and waterproof clothing to an advertisement for Turkish Baths in London guaranteed to ease illnesses associated with serving in the war. 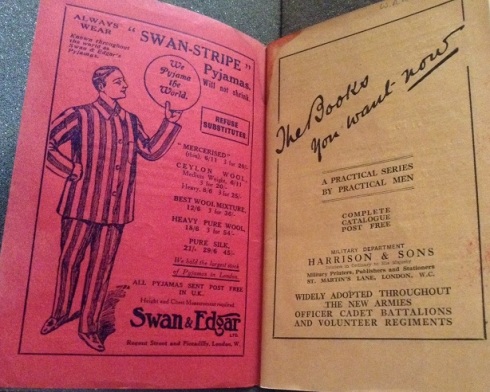 The Van Bergens, who were Lord Berwick’s tenants at Attingham during the war, were especially concerned for the welfare of wounded soldiers. As well as suggesting that Attingham was used as a war hospital the Van Bergens took a great interest in the Royal Salop Infirmary in Shrewsbury. 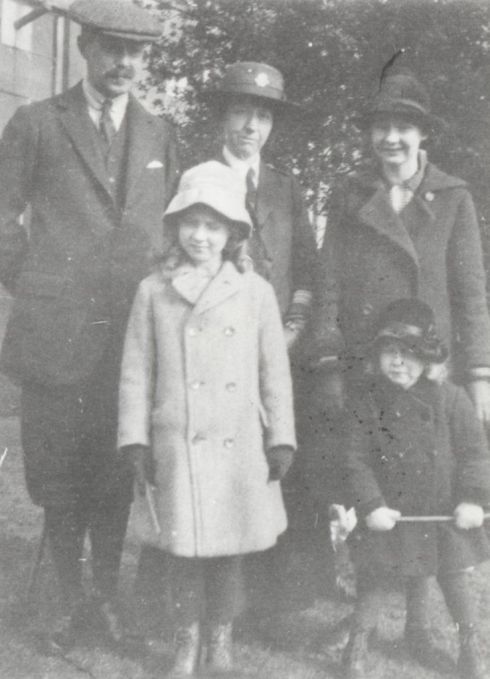 Mrs Van Bergen was on the Ladies’ Auxiliary Committee whilst Mr Van Bergen was involved with the committee weekly board, the finance committee and the committee for appointing medical staff. The Van Bergens also donated ten guineas to the Royal Salop Infirmary. The Infirmary is now the Parade shopping centre. For more information and for images, please click this link.

Lord Berwick’s Land Agent, Louis Dease, was asked by the Government to use wood from the Attingham estate to help to supply railway sleepers to be sent to France for railway lines.

The egg collection set up to provide eggs for use in Shropshire war hospitals was going well with 67,110 eggs collected in 1916. 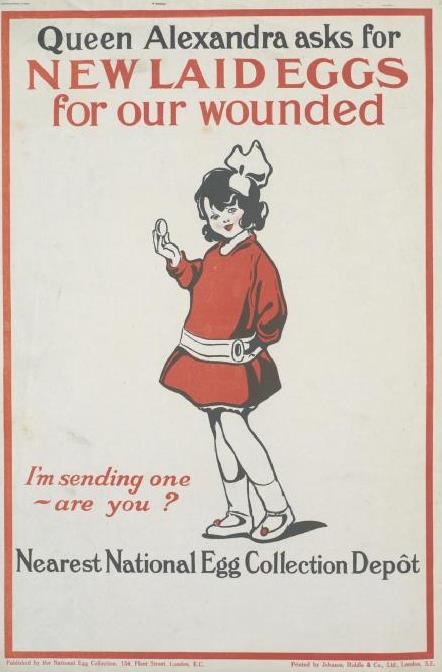 For 2016 the Walled Garden team at Attingham put on a display about food production during the war. They grew WW1 varieties of vegetables and there were even some hens to see!