A vision of beauty and goodness – August 1917

Between August and October 1917 Mrs Watkins and some of her team were feeding and helping with medication for wounded soldiers in the large clearing station of Dolegna during the offensive on the Bainsizza plateau. They lived in a small villa which the Italians had decorated for them with rose, shamrock and thistle designs and English mottoes.

The exterior of the house where the nurses lived at Dolegna.

As many as 1,600 wounded men a day were arriving at the Dolegna clearing station. The wounded filled both a big wooden shed and a large yard when they arrived on stretchers. In August 1917 Mrs Watkins’s team looked after a total of 31,614 men.

Teresa’s friend Lady Helen D’Abernon came to work at the Dolegna clearing station on the 4th of August 1917. Although initially excited to transfer to Italy from France where she had previously been nursing, Helen found conditions in the Customs House given to the Red Cross nurses to use at Dolegna unpleasant; hot, dirty and noisy as ‘the heavy lorries that are continually passing will make sleep uneasy if not impossible. Whenever an ammunition lorry crosses the bridge the whole house rocks and trembles.’ She remarks that the town is ‘rapidly degenerating into a dust-heap.’

Mrs Watkins’s team were sent to help with hospital work at other nearby towns when hospitals were under pressure. Once Mrs Watkins wrote that two nurses, one of whom may have been Teresa, were sent to a hospital six kilometres away. The nurses only allowed themselves four hours of sleep because they were so badly needed at the hospital. This photograph shows members of the No. 1 Red Cross Society and Italian soldiers in the grounds of a hospital.

On the 15th of August Teresa wrote to her future husband, Lord Berwick, that the workload for Mrs Watkins’s team ‘is steadily increasing. Our recreation huts are a great success and the authorities clamour for more, which is gratifying but expensive. The English artillery on the Italian front have also turned to Mrs Watkins to organise canteens.‘

Adding to their heavy workload, the women had to contend with the summer heat and a plague of flies. The constant noise of bombardment from the Front must have only made their work more stressful.

Mutinies and plummeting morale crippled the Italian Army from within. The soldiers lived in poor conditions and engaged in attack after attack that often yielded minimal military gain. Italian soldiers commonly complained about poor quality, paltry rations, so the refreshments that the team of women provided for them would have been greatly appreciated.

A photograph from Teresa’s wartime albums showing nurses and men with milk pails to give refreshments to the wounded soldiers on the train just visible behind them.

The work done by the women in Mrs Watkins’s team brought happiness to many soldiers. Marshal Caviglia recalls meeting Teresa during the First World War: ‘I always have in my mind the first time I saw you. I did not know you then. After the battle of Bainsizza I was going past a hospital. You were coming out, pale, serious, beautiful. I have never forgotten that vision of beauty, of goodness in the middle of war.‘ 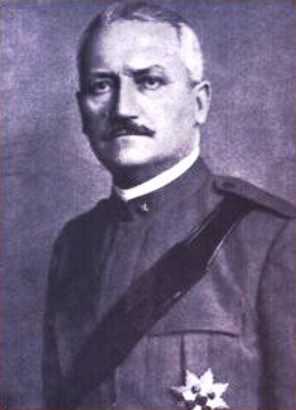 Marshal Caviglia, photo on Wikimedia Commons in the Public Domain.

The Battle of Bainsizza, or the Eleventh Battle of the Isonzo, began on the 18th of August and lasted until the 12th of September 1917. The Italians were generally the aggressors in the war and initiated eleven of the twelve battles along the Isonzo River. The attack went well for the Italians who managed to conquer the Bainsizza Plateau south-east of Tolmin, although the offensive wore off with both armies exhausted. This photograph in the Imperial War Museum Collection shows a view of the Bainsizza Plateau taken during the First World War.

Although few wartime letters survive relating to Lord Berwick, an envelope from August 1917 is preserved. The envelope was addressed to the Shropshire Yeomanry camp at Woodhorn, Ashington, Northumberland. Envelopes often offer valuable information about the whereabouts of people at certain dates, which is useful to piece together the wartime lives of Lord and Lady Berwick.

Lord Berwick’s uniform as County Deputy Lieutenant is shown in the center of this photograph. The uniform is displayed in Shropshire Regimental Museum. (c) SHYRO: 1914

One letter that we do have from Lord Berwick was written to Teresa’s sister, Gioconda, on the 26th of August 1917. He wrote of Northumberland that:

‘I like this place less & less and wish I could see some prospect of getting away. I am trying to get something in France but there may be difficulties …’

A notice in the North Devon Journal of the 16th of August 1917 gives a precious mention of one of the many men who convalesced at the war hospital at Attingham. The newspaper states that:

‘Rifleman C. Watts, son of Mr. and Mrs. W. Watts, of Parracombe, who has been in France on active service since last September was wounded in the leg and arm on August 1st, and is now lying in an auxiliary hospital, Attingham Hall, near Shrewsbury. His many friends will be glad to know he is well on the way to speedy recovery.’

Rifleman Watts’s story would be typical of the soldiers who came to Attingham. Unfortunately, few documents survive giving details of who came there or what their injuries were. Luckily Attingham has a number of photographs of the hospital in its collection, including this one of soldiers with a nurse and a dog. It shows three soldiers who have eye injuries. Other photographs show men who have lost a leg or who are on crutches.

Despite Germany’s attempts to cut food supplies to Britain by U-Boat attacks on merchant ships, the 1917 wheat harvest was the best in British history. However, the government remained cautious and food rationing continued.

There was a debate among people in Britain about whether it was more patriotic to refrain from buying new clothes or to spend. In the early weeks of the war milliners and dressmakers found little to do as women refrained from buying new clothes, although by 1915 ‘war crinolines’ began to be worn by some women with the full calf-length skirts using a lot of fabric.

A poster advising people not to spend extravagantly on clothing during the war. (c) Imperial War Museum Art.IWM PST 10120

Even in 1917 some women still argued that dressing in the latest fashions was patriotic, despite notices warning them not to dress extravagantly and to make do and mend.

Lady Lucy Duff Gordon, founder of the fashion company Lucile Ltd., said in 1917: ‘I thought it was the duty of every wife, sweetheart and mother to spend as much on dress as they could possibly afford in order to make the best of themselves for the sake of the men in  the trenches.’