The Spanish Flu pandemic had been sweeping the globe since early 1918. Teresa and others called the virus outbreak Spanish Flu because it was mainly reported in Spanish newspapers.  It was causing havoc all over Europe but because most European countries were at war with each other reports were suppressed to conceal the impact of the virus on their forces.  Spain was a neutral country, not involved in the fighting, so the epidemic was reported in their newspapers giving rise to its association with Spain.

Teresa’s friend Lillian Carlyle wrote to her that some of the people they knew had Spanish Flu, including Christobel the daughter of Evelyn Gordon-Watson with whom Teresa worked at the Italian front.

Teresa suffered acutely when she caught the Spanish Flu and was brought lower than during any of her previous trials during the war. She later admitted in her diary: ‘while I was ill, I heard of the deaths from ‘flu of a number of friends, among whom 5 or 6 young men and girls – and for a time I quite hoped my time had come too.’

Many people whom Teresa’s sister Gioconda was acquainted with had Spanish Flu, including Joan Bentwick who Gioconda worked with as a secretary in the Intelligence Division at the British Admiralty. Fortunately Joan survived. Another acquaintance of Gioconda’s, Miss Heynes, died after only three days of sickness. Gioconda was offered Miss Heynes’s place working in the British Embassy in Rome.

Gioconda photographed in Rome in 1918

Before Teresa fell ill she went to meet Mrs Watkins, the leader of the group of war nurses, at Verona. On October the 11th a fellow nurse, Georgiana R. Sheldon, wrote to Teresa from the American Hospital for Italian Wounded: I hope that you will let me know how things have been arranged and whether you and Mrs. Watkins are going directly to Gardone to arrange the convalescent home.’

The other hospital staff at the American Hospital were leaving but Georgiana stayed: ‘I feel the need of a change more than I can tell you, but, at the same time, I do not think this is the moment to travel, and also I do not like to leave the Hospital when, at any moment, there may be a possibility, although I hope not a probability, of an outbreak of the influenza in our midst. This morning we heard that little Nadine Kirsch has died of it and the boy, Giulio, is very ill indeed.’

Georgiana appreciated keeping in touch with Teresa, adding humourously: ‘Do send me a card, now and then, and tell me how you are and keep up our spirits here. You must not forget that you have a life of excitement and must therefore stand by the dullards who are here in Florence.’

The situation for the Italian army was hopeful in October 1918 as they mounted an offensive targeting Vittorio Veneto and broke through a gap near Sacile. On the 24th of October Italian divisions incorporating British, French and American soldiers crossed the Piave River and attacked the four remaining Austro-Hungarian armies.

The war was almost over and the casualties near the end of the war are poignant. On October the 25th Teresa received a letter from Adolf Keyeux, the Belgian refugee boy who she had helped with his education in England where he had fled in 1914. Adolf had just joined the Belgian Army in the Field. On October the 17th the Belgian King Albert had entered the city of Ostend on the Belgian coast.

Teresa kept the letter, noting that it was found on the body of a dead German officer who had taken it from Adolf who had been killed. The letter is even more heart-breaking because of the cheerfulness with which Adolf writes telling Teresa that ‘we are very heartily welcomed everywhere in our reconquered county’ and went through Bruges just after the Germans left, which felt like ‘a real triumph’ as ‘all the people were out, shouting & cheering us, thousands of flags were flying.’

Adolf adds: ‘You will excuse my writing you such a hurried letter but we are so busy in these times. If we push the Germans back, it is not always without pain. I am now in a post that is what may be termed a ‘good job’ but I have plenty to do. It is often dangerous but always I remain lucky and as I volunteered to see interesting things, I am just in the right place.’

Teresa’s future husband, Lord Berwick, was to fall victim to Spanish Flu in December 1918. His time in hospital recovering from the illness prompted him to worry about the fact that he was thirteen years Teresa’s senior. He wrote: ‘when I went into hospital I felt so old and tired and the Drs. made me think that I was not very strong, so that I began to think that it was too late to start life again.’

Lord Berwick on his wedding day

People in Shropshire received news of many Allied victories in October 1918. The end of the war was coming into sight. Teresa’s friend Tiny Cox, working in a London hospital, wrote that ‘we are literally working 12 hours a day – considering the heavy fighting & grand news now the casualty lists have been unimpossibly small. I’m to think we may really be without a war in a few months.’ 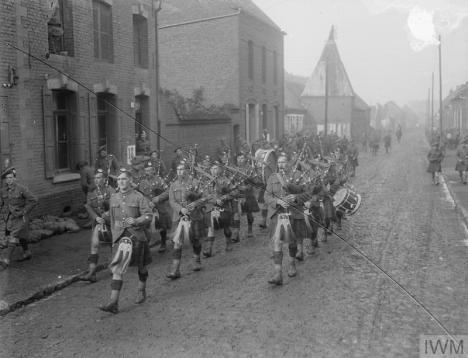 This photograph in the Imperial War Museum collection shows pipers of the Gordon Highlanders marching though the newly liberated Douchy-lès-Ayette in France in October 1918. © IWM Q 11412

Allied troops renewed their offensive in France, beginning a series of battles that forced the Germans back. The Allies broke through the remnants of the Hindenburg line. The German army retreated and many prisoners were taken.