The Tenth Battle of the Isonzo began on the 10th of May 1917 with preliminary artillery bombardment from the Italians led by General Cadorna. The Italians planned an infantry advance along a 40 km front in order to achieve a breakthrough towards Trieste in north-east Italy. Initially they were successful and by the end of May they were within 15km of Trieste.

Teresa’s mother, Costanza Hulton, wrote to her daughter: ‘It must be so exciting expecting the beginning of the offensive from day to day! I hear there are 2000 British troops. If I were you I would stick to work for Italian soldiers. You know so well how to deal with them. Don’t hop off to other things.’ 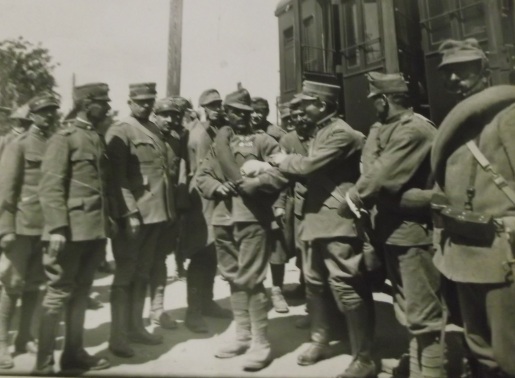 The Italian hospitals were filled as casualties mounted. Teresa desperately wrote to another hospital to ask if they had spaces for the wounded arriving at Cervignano. Unfortunately they did not. One of the largest hospitals was Villa Trento, situated between Udine and Gorizia in north-east Italy. It was a British Red Cross hospital with 180 beds. It was under the charge of Dr. Brock, leading surgeon Sir Alexander Ogston and George Macaulay Trevelyan of the Ambulance Unit.

Inside the hospital at Villa Trento (c) British School of Rome

Click here to see a photograph of Villa Trento hospital staff in the Spring of 1916. The photograph is now in the Imperial War Museum Collection and includes people whom Teresa corresponded with as part of her war work.

In May 1917 the Cervignano canteen where Teresa worked had to be evacuated for three weeks due to heavy bombardment of the town. The Italian 3rd Army ordered Mrs Watkins and her team to move into quarters in outlying villages where they continued to work at a temporary station until they could return to Cervignano. Costanza was worried about her daughter’s safety and sent a postcard saying that she ‘Read in the bolletino this evening that Austrian shells killed 6 men in the hospital of Cervignano. Do send some news.‘

This photograph in Teresa’s wartime album shows a house near where she was based in Cervignano. The house had been hit by a bomb.

Later Costanza wrote: ‘It is only by indirect ways that I have had any news at all of you since 16th and I have no idea how or where to address you. – Please send me some news as soon as you possibly can and realise that I DO read the bolletino every day.’

Costanza must have been relieved to receive a reply from Teresa who told her that ‘On Thursday they set out to shell us properly from about 6 in the morning when the first house was struck. I got up and dressed and then went out to see what could be done and passed the rest of the morning ‘til eleven in a house where some people were being dug out and I did first aid to those who were out first.’

Costanza reprimanded her: ‘I wish you would try NOT to overwork.- Do let things slide a little and don’t do consistently 29 things in 24 hours’

Demand for hospital supplies was intense. Teresa used a car for carrying out supply work and was helped by the Red Cross ambulance unit who offered her petrol, spare tyres and a new inner tube when hers punctured. Over 1,500 people were employed in the Joint War Organisation’s transport operations by 1917, many of the women.

Costanza was on a committee arranging garden fêtes for the Edith Cavell Fund. Many people had schemes to help the wounded, including a schoolmistress who began a subscription for buying and sending writing paper to Italian soldiers. Some is sent to Teresa for use by men at Cervignano and Costanza advised her: ‘Be sure you acknowledge this gracefully and help to encourage the tender young plants of reciprocity and good feeling.’

A monument to nurse Edith Cavell in London. Edith Cavell was the matron of a Belgian hospital who saved the lives of soldiers from both sides. When she helped wounded Allied soldiers escape to neutral territory the Germans executed her by a firing squad in 1915.

Many supplies were increasingly hard to come by, as is evident in a letter written on the 17th May where Costanza tells Teresa that she has been sent some sugar by Mrs Watkins which will ‘be saved for great occasions.’

Teresa enjoyed a welcome respite from her duties when she was visited by Ada Favlan, an English friend who was delighted by the ‘schemes undertaken for the uplifting of our fellow beings.’ Teresa gave Ada a copy of a novel called ‘The Dark Forest’ by Hugh Walpole. The novel was inspired by Walpole’s work for the Red Cross in Russia.

Ada was not the only visitor. On the 8th of May Costanza writes that she sees that Teresa is to have a visit from Rudyard Kipling and reminds her to be ‘very sweet to him.’

Whilst in Italy Rudyard Kipling toured a battlefield site in 1917 shortly before the action took place. Kipling had been invited to Italy by the British Ambassador, Sir Rennell Rodd, who proposed that writers from England and Italy should visit each others’ front lines so that their resulting writings might increase awareness in their home countries. In the 1930s Kipling came to stay at Attingham for a short time and the Berwicks were friends with his daughter and son-in-law. Kipling’s son John had died aged 18 in 1915 in the Battle of Loos. Kipling’s articles describing the war in Italy can be read here.

Kipling’s home, Bateman’s, is now owned by the National Trust.

In his last surviving letter sent during the war years, written on the 30th of May 1917, Charles Michael Wentworth Noel-Hill, later to be the 9th Lord Berwick, writes that ‘the idea of my going out to France again has fallen through.’ 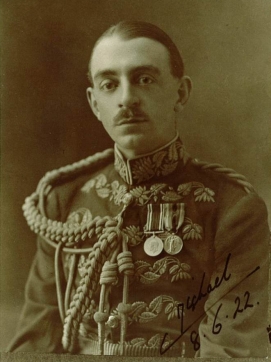 Charles Michael was at Sheerness, north Kent, working as a bombing officer. This involved training 600 men and arranging bombing schemes.

On the Western Front, where many men from Shropshire were fighting, mutinous French soldiers refused orders to advance at the end of May. Whilst the situation was resolved the main burden of the Western Front fell to the British. 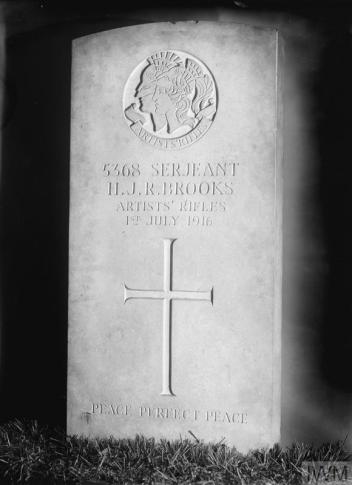 An example of one of the gravestones designed by the Imperial War Graves Commission (c) Imperial War Museum, Q 57680

On Friday the 28th of June 2019 there will be a special WWI commemoration tour and talk held at Attingham. To find out more and book a place, please click here.